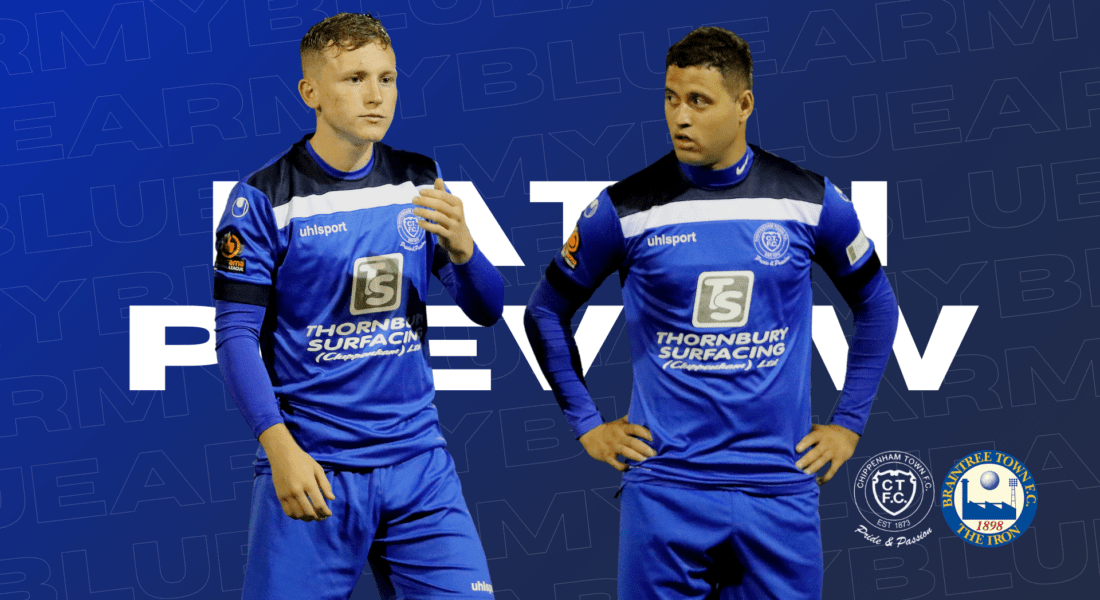 Simon Lawrence previews all the action, ahead of Saturday’s National League’s tie against Braintree Town.

On to the second of the two home fixtures this week at the Thornbury Surfacing Stadium and the Bluebirds face the Iron this Saturday as Chippenham Town FC welcome the Players, Officials and Supporters of Braintree Town FC to Wiltshire.

After the bitter disappointment of Tuesday night against Hemel Hempstead, everyone at Chippenham will be looking for a much needed reaction to the adversity we seem to be facing at home both in terms of the result and I am sure the performance levels within the side.

We just don’t seem to be doing it home at the moment, for what reason this may be is the next challenge for Mike Cook and his Staff to overcome as Chippenham will be very keen to take points from this week given the tricky away schedule that follows with 3 away fixtures in November, Dartford and Maidstone with a quick trip home for Billericay in between, November could be a month that certainly defines our ambitions of the top 10 with both Dartford and Maidstone looking like challengers for the big prize of promotion at the end of their respective campaigns, it is vital we get something out of the game against current strugglers Braintree.

Braintree themselves come into the game into dreadful form, winning only once this season (a 3-0 win against Hemel in the second game of the Vanarama National League South) and you have to go back to August 30th since their last point (a 2-2 draw against Billericay) and they have succumbed to defeat in their last 8 fixtures in all competitions that have followed.

Our recent home form has been a cause for concern lately and this humble writer can’t help but spot the irony in the comments that seem almost identical pre match as they did for the Welling and Hemel fixtures however, they have arrived in Chippenham and left with 3 points, this is something that I am sure cannot continue if we have any chance of picking up the results needed to finish in the top 10 come the end of the season.

After Tuesday’s game against Hemel aside from the pride that took a little bit of bruising, we have also lost Danny Greenslade it would seem to a muscle injury. He was moving rather gingerly upon his departure from the ground Tuesday night and almost certainly won’t be fit enough to make the squad this weekend. Will Richards has of course been pinged on the NHS Track and Trace and one can only hope his time in isolation is over before Saturday or our defence cannot really afford to take anymore hits with Alex Bray still not quite fit enough to take part.

Braintree manager Ryan Maxwell will be bringing his side as mentioned in a very poor run of form but with players like Femi Akinwande bringing his brand of power and pace up top as well as a wealth of experience at this level with Billericay, Dartford and Concord to name a few, Chippenham will have to once again be very alert to the danger if they are going to keep Braintree quiet. In the last 8 defeats for the Iron, they have only scored on 3 occasions and never more than once so all signs point to a home win should Chippenham’s notoriously resilient defence turn up and we can be a little more creative and expressive going forward.

In the interview on Tuesday, manager Cook has threatened to “Ring the changes” where personnel is concerned in order to get a reaction that he and his staff are looking for. It will be interesting to see if and where those changes are made with players on the bench and in the academy frothing at the mouth at the chance to get in and show what they can do at this level.

Also please be reminded that all supporters are invited to join us in the Blue’s Bar at 7.30 on Saturday for our Bingo Night and Fish and Chip supper! With Free Entry this is sure to be a fantastic night for supporters and if you are a seasoned veteran of the Blue’s Bar or a first time visitor, it really helps the club when we get behind these initiatives. So get yourself down, have a few drinks, enjoy some Fish and Chips and try your luck on the Bingo. You never know, you might make some new drinking buddies for matchdays as well!

Safe trip to all joining us Saturday and as always, good luck to Mike, Hosk, Macca, Horgs and all the lads as we seek to put on a good performance in front of the home crowd and turn this place into the fortress once again! COME ON YOU BLUES!!