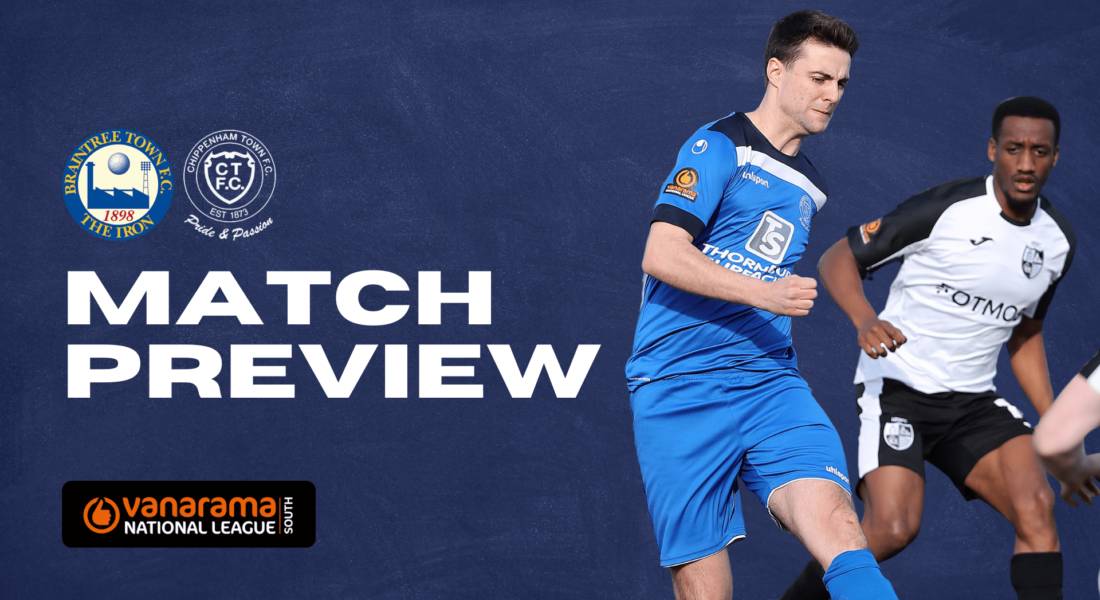 Another week, another difficult game in the Vanarama National League South as Mike Cook and his Chippenham Town side make the long trip to Essex and Cressing Road, home of Braintree Town F.C. The Bluebirds head into the game needing points to get their faltering playoff ambitions back on track whilst contrastingly, the Iron are desperately clawing themselves away from the foot of the table in a bid to avoid the drop into step three of non-League football.

Last time out for Chippenham was a bit of a hard one to take. After starting the month with a 1-0 victory against Concord, Chippenham were looking very strong favourites to keep up this recent run of good form and consolidate their spot in the end of season showdown. However, a defeat against Welling saw Chippenham needing to pick up points in their home fixtures against Eastbourne and Hampton & Richmond respectively. The two games almost were a carbon copy of each other with the Bluebirds finding a lead in both games only for a late goal to peg them back to a 1-1 draw. A result that at other times in the season would be viewed as a good point, but when you are chasing the pack and it’s as tight as it is for those playoff berths and of course given the manner in which we ended in a tie. It has to feel like points dropped.

The game against Hampton & Richmond was a real affair for those in attendance with Chippenham making a lot of the early movements in the game, playing some fantastic flowing football and in the end it was a set piece that unlocked the Beavers defence as a corner swung in to meet the head of Jordan Young, his flick to the back post caused confusions for the men in white however, Harrison Minturn was on hand to build on a Man of the Match performance against Eastbourne with his first Chippenham goal and send the supporters behind the goal into rapturous applause. The second half came about and Chippenham were rarely threatened by Hampton & Richmonds industrious yet fairly ineffective forward line. Sadly as with the Eastbourne game, the clock started to tick and Chippenham sat in deep and invited Hampton to break them down and in the end, a scrappy move through the middle saw the ball arrive at the feet of Ruardh Donaldson whos thunderous strike with his weak foot flew past Will Henry in the Chippenham net and condemned the Bluebirds to another draw in a deja vu style fashion from the previous week.

After the game Chippenham manager, Mike Cook called upon his players to return to winning ways if they have any chance of staying in the mix for the playoffs come May and with a very tricky run in, they will need to be picking up points now rather than later or else face narrowly missing out after occupying a spot at the top end for most of the season. Kicking off the response from the Bluebirds is a trip to Cressing Road, home of Braintree Town FC and the Iron. A club that find themselves currently staring up at the rest of the league (except for Essex rivals, Billericay) however, have found a little form of late with their defeat last weekend against Dulwich Hamlet ending a run of 7 games unbeaten for the Essex side.

Braintree Town, otherwise known as the Iron are managed by Ryan Maxwell and despite coming into the fixture against Chippenham in 19th place in the League, this is not the kind of season that Braintree and their supporters are used to. A very successful non-League club, the Iron won the Conference South in 2010/2011 and in the 2015/2016 season, Braintree finished 3rd in the re-named National League, just missing out on a place at the Wembley showdown for a place in the EFL after a narrow two legged defeat to Grimsby. In 2016/17 however, the Iron didn’t fare as well and were relegated to the National League South following a bottom four finish. With only one team going down to Step 3 this season, Maxwell might be counting his lucky stars that Braintree are 6 points ahead of Billericay. But, with a game in hand on them, and results being very indifferent as the final standings take place, Braintree will know that a small slip anywhere now could leave them in disaster and will fight and scrap for every point they can put on the board. Welling and surprisingly local rivals Bath City are also very close to being dragged into the mix and a win for Maxwell’s side against Chippenham will see them go above Bath if they fall to defeat against Ebbsfleet at Twerton Park. So with plenty to play for at the bottom as well as the top, this promises to be a thrilling encounter and another brilliant chapter in the 2021/2022 National League South season.

For Chippenham however, a win against the Iron could see them move back to within a point of the playoff spaces (results depending of course) and Cook will be once again without defender Will Richards who’s injury (Hamstring) will see him miss at least a couple more weeks of the action. Aside from Will, we have Callum Gunner nursing a bad ankle but his involvement at the end of the game against Hampton & Richmond should see him back in contention and pushing for a place in the starting line up once again. The injury picked up against Welling was untimely for the midfielder who was really finding his form next to Russe in the Chippenham midfield. For those who weren’t in attendance on Saturday, you may have not seen that Chippenham once again have gone to Swindon for an exciting young talent called Mo Dabre. He made his debut in the game against Hampton and he too will be pushing to retain his place in the line up after a very bright debut, looking very tricky down the wing and linking up well with Danny Greenslade down the left hand side.

So if you listen to the bookmakers on this one, Chippenham are coming home with a straightforward three points however, with all the above and its relevance and Chippenham’s own tendency to never do things the easy way, we all know this is not going to be as much of a walk in the park as the league table would have you believe. With only 11 or so games left to go in the League, there has never been a better time to follow The Bluebirds wherever you can. The support that the lads receive is so well appreciated by all of them and it makes a real difference both home and away to see the blue shirts and the Chippenham supporters behind the goal sucking the ball in!

Tickets are available on the day for Braintree and it promises to be another exciting game in the story of Chippenham Town’s 2021/22 season! If you are heading to Braintree we will see you there.

If not, let’s make sure we pack the park on the 12th of March for our home game with pre-season title favourites, Dartford FC!!