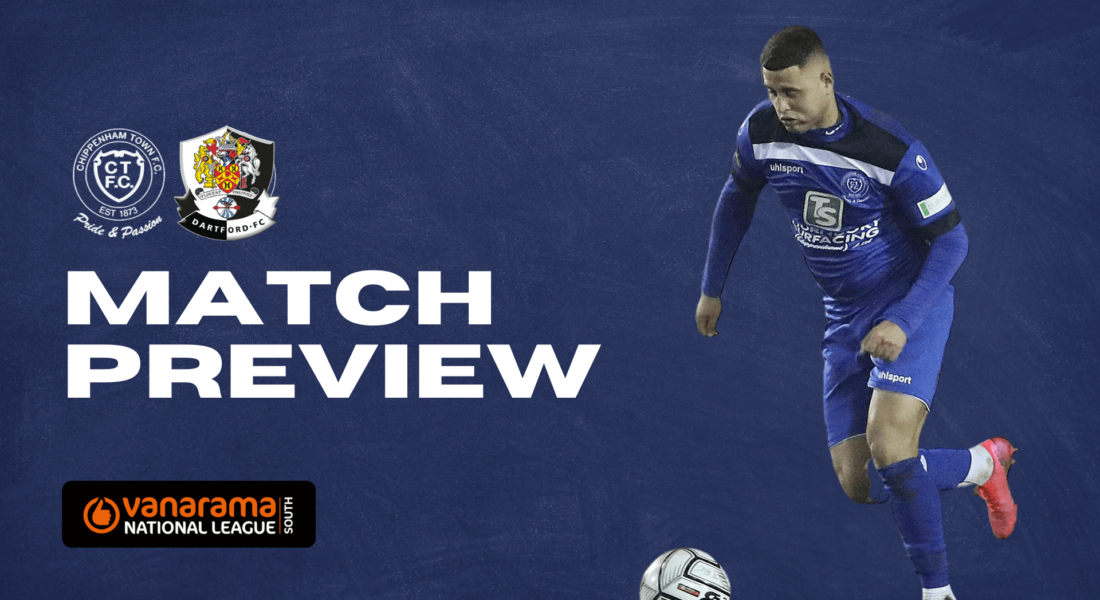 The Bluebird’s only league fixture that takes place at the Thornbury Surfacing Stadium in March will be against promotion chasing Dartford.

Both sides come into this fixture with up and down results within the early parts of the year. The Darts’ form coming into the new year was that of disappointment, reaching a head in February, where they were dumped out of the FA Trophy by Step 3 side Needham Market.

Since then, however they have picked up 6 hard fought points from 3 games, including a brilliant 3-2 victory over table-toppers Dorking. Chippenham come into this match up having lost narrowly to Braintree on Saturday. That game marks 4 games without a win, but there are positives. Chippenham Boss Mike Cook has said that enough chances were created within the last three, and overall he is not worried about the recent poor run.

The match against Braintree was one of few positives from the Bluebirds camp, with the side slumping to a disappointing loss. Despite Chippenham having a number of chances that were hacked away from the line, including a Joe Hanks corner that nearly crept in directly from the set-piece. Jordan Young and Luke Russe also had shots that were beaten away by Braintree defenders, but the real first half talking point came on the 41st minute.

Mo Dabre had drifted past Matt Moloney following a headed pass from Russe, before the Moloney had missed the attempted clearance and sliced through Dabre. Referee Callum Walchester had no hesitation in showing the full back a straight red. Opinions around the ground seemed to be split, with fans from both sides arguing over the decision.

What cannot be argued however is that Ryan Maxwell and the Braintree bench were persistent in arguing their case to the referee, and their protests saw Maxwell receive a booking and another team member shown a red card. After tensions had calmed during the half-time interval it seemed that Braintree had come out of the blocks the better side, and after 70 minutes the Iron’s took the lead following a rare defensive blunder from the Chippenham back line. With 20 minutes to go and with a man advantage Chippenham looked to throw the proverbial kitchen sink at their Essex opponents.

A speculative attempt from Callum Gunner was lashed over the bar and into the travelling Chippenham contingent behind the goal, and a number of crosses from Noah Coppin and Spencer Hamilton could only reach the heads of Braintree defenders. Despite the less than favourable result,

Mike Cook has suggested that there is little to worry about, as his team are certainly creating enough chances. In his post-match interview, Cook said “The last three games we have created enough to take the points away”, and that seems to be consistent with the statistics and general feel around the Bluebirds at the moment. Chippenham prospect Noah Coppin was a bright spark in the few minutes that he managed to appear in, and it is likely that Mike Cook and the coaching staff will add the youngster into their Arsenal for the upcoming games.

Our opponents Dartford couldn’t have come into the matchup with a better result for a previous match. With the Darts claiming a big 3-2 win over Dorking Wanderers last week. Dartford rushed into a two goal lead within the first 24 minutes, and looked the much better side. Tricky forward George Porter bagged two goals on that afternoon, and he will be looking to add to his goal tally even further. However Dartford’s recent form hasn’t been perfect, with 2 big blemishes of note.

The most recent was a disappointing 2-1 defeat to Hungerford, with perhaps the biggest shock being a poor 1-0 loss to Step 3 Needham Market in the trophy. That result was the nail in a 4 game winning run, and Chippenham will be looking to exploit the same avenues that were taken advantage of by the Southern League Central side

These sides have already played each other within this season, and it has been largely considered by Chippenham fans as one of the performances of the season. Back in November, Dartford looked to be unstoppable and were heavily involved with the race for the title with Chippenham looking to continue their impressive start to the season, and to continue their run of being unbeaten away from home. The game started well for the Bluebirds, with Dan Griffiths glancing a good header past Dan Wilks.

Although in the space of 2 minutes it went from agony to ecasty for the Darts, with goals from Ade Azeez and Noor Husin in successive minutes putting Chippenham down going into the break. The second half however showed remarkable character from the Bluebirds. A Ricky Aguiar free-kick found its way into the net for Chippenham’s equaliser just after half-time, but after some sustained pressure from the Darts they found themselves back in front following some scrappy play in the Bluebird’s penalty area.

Chippenham began to place monumental pressure on Dartford’s experienced back line, and with only seconds to play, Oluwasegun Lawal delivered an inch perfect cross onto the head of Luke Russe who headed home to monumental celebrations amongst the Chippenham ranks.

Chippenham will be hoping for a performance of the same calibre as that chilly afternoon in November, meanwhile the Darts will be looking to extend their run and gain precious points on Oxford City and local rivals Maidstone United above them. Mike Cook has admitted that a playoff finish for Chippenham may be more than optimistic now, but shall the Bluebirds topple Dartford on Saturday the complexion of the season could follow a different path.

Tickets can be pre-purchased online via this link and at our turnstiles, right until kickoff!