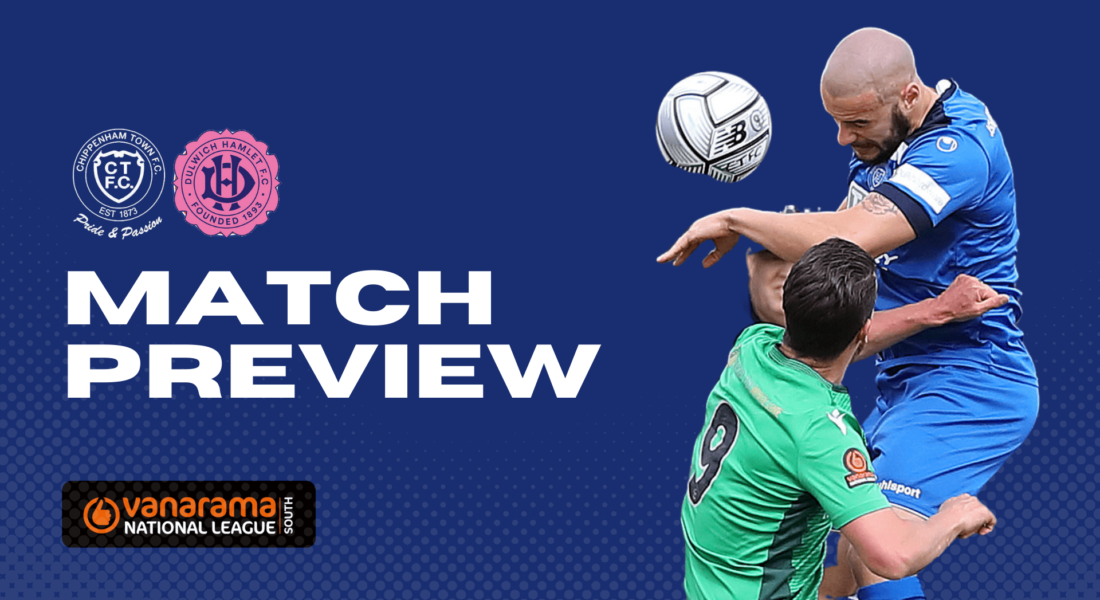 Jamie Oleszynski takes a look ahead, to our National League South clash with Dulwich Hamlet.

After an eventful Easter weekend for the Bluebirds, the final four matches of Chippenham Town’s league campaign remain and it is certainly all to play for. The first instalment of the four remaining cup finals takes place at the Thornbury Surfacing Stadium this weekend against fellow playoff hopefuls Dulwich Hamlet and both sides will be looking to take maximum points to assist in their hunt for that final playoff spot and to catch Havant & Waterlooville who currently occupy the highly coveted 7th place.

These two sides are certainly familiar with each other over the last 4 years, as this will be the 9th meeting between the two sides since 2018. Despite this, it probably feels an age since the two last met. The bluebirds travelled to South London as their first match of the season in August 2021, which ended in a 1-1 draw. Danny Mills’ header was cancelled out by Marlon Jackson’s second half spot kick, which was on balance a fair result on the day.

Since then however there has been a vast change to the Chippenham camp, with 7 of the 16 man squad no longer being registered to the bluebirds. Since then, both sides have had up and down form. Dulwich put in a very strong start to the season, but after the busy Christmas period their form has wilted, and this has led to the Hamlet’s record of being winless In their last 9 games. In terms of the table, Chippenham currently sit a point ahead of their opponents on Saturday and Dulwich having played a game more. If there is a question of odds, you would have to place it in favour of Chippenham.

Chippenham’s Easter Weekend began on Good Friday against title challengers Dorking, however the result was far from good. The Bluebirds lost by 3 goals to nil at Meadowbank, and it was perhaps one of the most comprehensive defeats for Chippenham this season. Marc White’s Wanderers were clinical in the first 45, with Jason Prior and James McShane scoring goals to put the game beyond doubt before the turn of the half.

Due to the fast paced nature of the Easter Period, it wasn’t long before the squad was up for another test, and it was against 5th placed Oxford City. There was a muted atmosphere Thornbury Surfacing Stadium, as many supporters perhaps

feared that another match against a side challenging for promotion would end in defeat, but it was far from it. The first half was even on balance, with both sides hitting the crossbar; Oxford through Iaciofano and Chippenham through Santos. However merely minutes into the second half the deadlock was broken through Alex Bray.

The winger picked the ball up Hamilton and proceded to drift in and out of Hoops defenders, before firing high into Dudzinski’s net. That goal proved to be the only one, and with that Chippenham took three precious points as they look to continue their hunt for the playoffs.

If any Bluebird fans are reading this and wonder what needs to be done for Chippenham to reach the playoffs in their remaining 4 matches, it is pretty simple. Chippenham face off against Dulwich Hamlet, Ebbsfleet, Hungerford and Havant & Waterlooville between now and the middle of May. Each game will in essence be a six-pointer, as each opponent are within their own hunt for the playoffs. The least that you can do is get down to the Thornbury Surfacing Stadium for Chippenham’s remaining home fixtures (Dulwich Hamlet- 23rd April & Hungerford-2nd May) and #PackthePark.

Click here for all the information you need ahead of the game, with our dedicated Match Guide.

COME ON YOU BLUEBIRDS! #BlueArmy