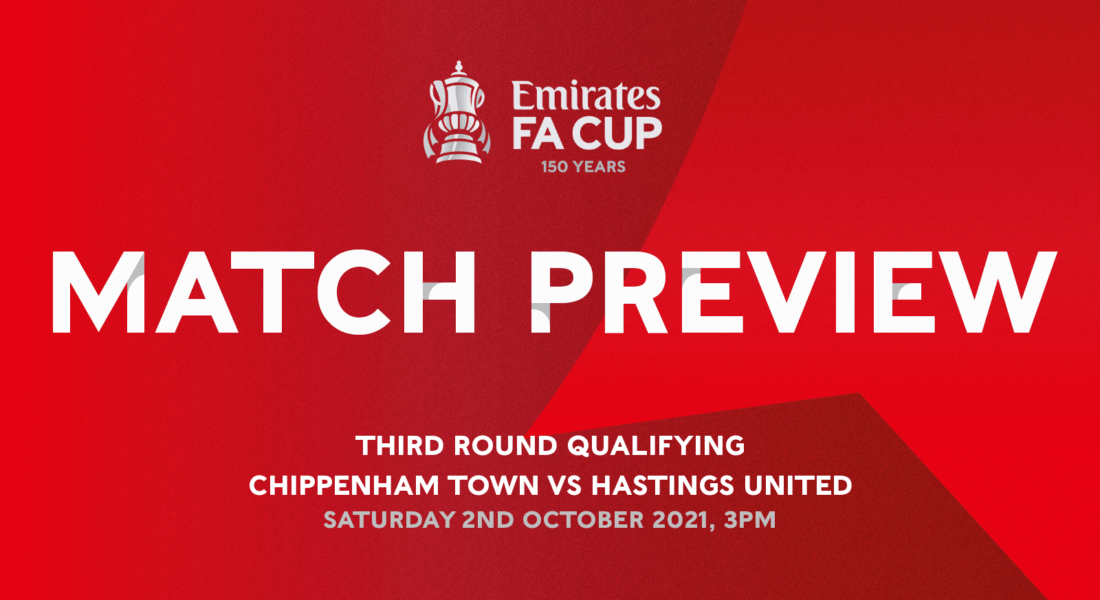 Check out our Match Preview, ahead of the upcoming Emirates FA Cup 3rd Qualifying Round against Hastings United.

The Bluebirds return to the FA Cup this weekend following our humbling in the league by Ebbsfleet on Tuesday night under the lights. The 3rd Qualifying Round is becoming a familiar territory for Chippenham Town now since our ascendency to the National League South, usually coming up against lower league opponents in the 2QR as it proved this time around. We have taken our place in this round via a win against Poole Town albeit requiring two games to get the job done. Whereas usually this round can throw up a tie with a bit more fear to it, Chippenham will be happy with the home draw against another lower league opponent in Hastings United FC of the Isthmian South East Division.

Hastings or “The U’s” come into this fixture sitting 7th in their league and are managed by Chris Agutter. Chris has been quoted as “having nothing to fear” in Chippenham of the National League South, claiming that they took Ebbsfleet to a penalty shootout in this competition last season and were the better team on the day and penalties were a cruel way to exit. Should this be the case, Chippenham will have no choice but to show respect to our lower league opponents with a prize of £5,625 on offer for the winners and a place in the 4QR (the final round before the 1st Round Proper) This prize money will come as a welcome relief to both sides and despite the difference in levels, make no mistake this money would be just as beneficial to ourselves as much as Hastings.

The Blue Army come into the fixture a little battle hardened as games come thick and fast for the home side. Following the midweek defeat to Fleet, Chippenham currently have an injury list sadly much larger than they would like and several players carrying knocks into games that are playing through the pain. Alex Bray is out for a good couple of months with a torn hamstring, Callum Gunner is suffering with a shoulder injury and Adam Mann is doubtful for the 90 following a lay off with an ankle injury.

Good news for the Bluebirds as Danny Greenslade is picking up minutes and inching back to fitness and new boys Michael Elechi and Garrett Kelly are settling well so a good amount for Mike to pick from as he seeks to put Chippenham in the 4th Qualifying Round for his second time as manager following last terms sickening defeat to Concord at the final hurdle.

Tickets for this game are available both (Online until 11am today) and on the gate on the day. so get on down to the Thornbury Surfacing Stadium on roar the boys home as the bid for another big FA Cup win in our illustrious affair with the greatest cup competition in the world!

COME ON YOU BLUES!!

Please note, the Bluebirds Bar will be opening from 12pm for coverage on the big-screens of Manchester United vs Everton. Due to FA guidelines, alcohol is NOT permitted outside on the terraces during today’s game.