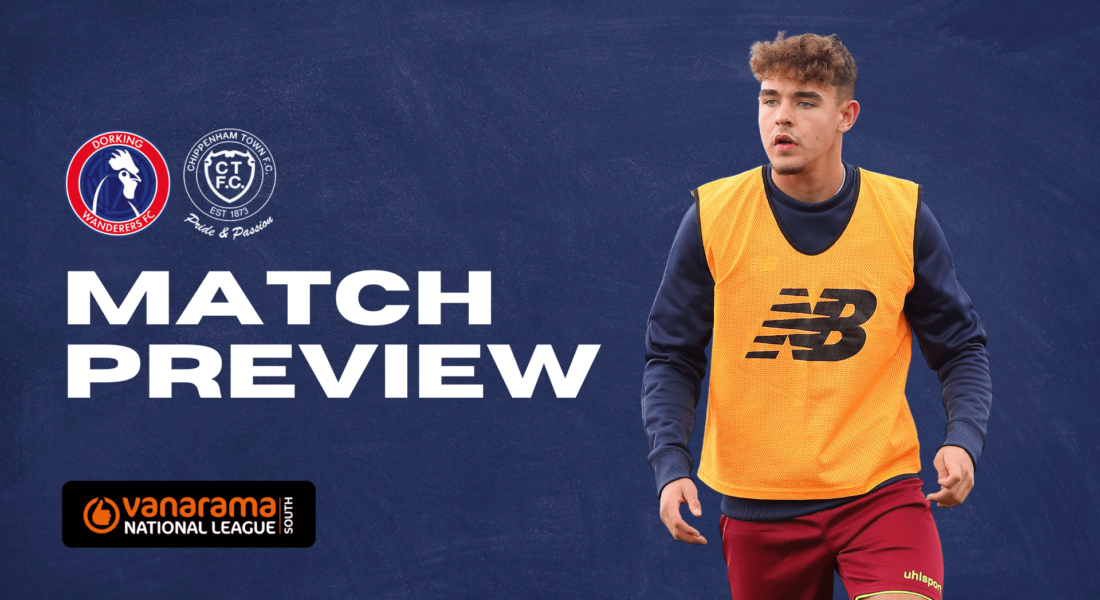 As Chippenham head to the business end of their Vanarama National League South campaign, every game seems almost like a cup final at the moment and after defeat against league leaders Maidstone United at the weekend, the run in simply doesn’t get any easier with second place Dorking next in Chippenham’s crosshairs.

We visit the Wanderers at Meadowbank in fine form and no doubt they will be looking for 3 points to continue their own league title ambitions and the Bluebirds will need maximum points to stay in touch with their own faint playoff hopes.

Last time out against Maidstone United, it was a game of very fine margins. Against all odds from the very beginning The Bluebirds were without ever present keeper Will Henry after his dismissal against Billericay the week before saw the former Swindon stopper miss his first game in the league this season.

After Will himself picked up the phone to former coach Steve Hale, Nykah Liburd-Hines was brought in to deputise for Henry and did a fantastic job however, could do nothing to stop both Jerome Binnom-Williams and Joan Luque from notching either side of a Tom Mehew stunner on his home debut for Chippenham.

The game was then marred by another farce of a decision from the referee. A poor afternoon from the man in the middle was set in stone when Mo Dabre rounded the Maidstone keeper Tom Hadler in the 92nd minute and was hauled down for an obvious penalty and potential red card. Everyone in the ground could see it was a stonewall penalty except for the referee and his assistant 10 yards away.

Sadly, it was the luck that summed up Chippenham’s afternoon as the referee waved protests away and Maidstone saw out the victory and the scenes of celebration at the end showed just how far Chippenham have come.

Very few would have predicted the Saturday night that would follow. The news broke via the CTFC Website later that evening that manager Mike Cook had tendered his resignation to the board. With 6 games remaining and only 2 points outside of the playoffs it would seem, to most, a very strange time to make the decision however, Mike had his reasons and goes with the full blessing and thanks of the football club, its board of directors and I am sure its supporters.

Mike was with us during one of the most testing times in recent years with the COVID pandemic causing havoc during his tenure and we would all like to wish Mike the best in his future endeavors wherever they may lie.

Heading into the Dorking game, CTFC have announced that Gary Horgan will be placed in temporary charge of First Team affairs until the end of the season. For those who have been living under a rock for the last decade, Gary is Chippenham. Two spells as a player with the club in both the Dr Martens League and most notably in the Southern Premier League where in 2016, Gary and his teammates claimed promotion to the National League South as Champions with a record points tally and a 26 game unbeaten record.

When he retired from playing, Horgs was handed the Assistant Managers job to Mark Collier and has been with the club ever since. Gary has previous management experience as well guiding Swindon Supermarine to safety in his first attempt in the hotseat and I am sure Horgs with his knowledge, likeability and dressing room reverence will unite the clubs players and supporters in the aftermath of this revelation and steer the good ship Chippenham in the right direction.

I would like to personally wish Gary all the very best in the next couple of months and I am sure many supporters are finally excited to sing Gary Horgan’s Blue and White Army!

And the first chance they are going to get to do this is at Meadowbank for an Easter Showdown with Dorking Wanderers. A club that has such a fantastic story not just for this season but for non-League as a whole.

In 1999, Marc White formed Dorking Wanderers as a Sunday League level side. After 19 promotions, Dorking now find themselves with their own YouTube documentary filmed by the wonderful Bunch of Amateurs Team, they are now playing in front of 1000+ supporters on a regular basis at home and find themselves on the cusp of their 20th promotion, this time to the National League and who could begrudge them their success.

Last time out, Chippenham took on Dorking at The Thornbury Surfacing Stadium at the beginning of what seemed to be a very tricky December. The Wanderers arrived as strong favourites in Wiltshire and left with their tails tucked firmly between their legs after a 4-1 mauling at the hands of the Bluebirds.

3 goals from Harry Parsons and a late goal from Ricky Aguiar gave Chippenham an emphatic victory in a game where Dorking threw everything at a Chippenham defense that showed just how resilient it can be when under pressure. Dorking will be looking to make amends for this showing and get a little revenge on their Wiltshire counterparts in this fixture. Dorking have so many players to watch out for in their squad. Defensively, Bobby Joe Taylor and Ed Harris will be particularly strong at the back.

Alfie Rutherford when he is not keeping goal against Hemel is often among the goals and finds himself on 22 for the season so far this term with only Ryan Seager and Shaun Jeffers finding the net more than the impressive Rutherford. However, the midfield is truly where Dorking are their strongest. Wes Fogden, DJ Oldaker, Niall McManus, Josh Taylor, the Wanderers possess a plethora of talent in the middle of the park and that is without arguably the league’s best player in Matt Briggs who will miss the game with an ACL injury.

Dorking will also be without Jason Prior, the talisman striker who has led the line for much of White’s time in the National League South and will miss out with a broken collarbone.

Chippenham head into the game with injury concerns of their own. The lively Zaid Al-Hussiani who tore Billericay apart and was causing problems for Maidstone on Saturday before his withdrawal from injury will be assessed through the week.

Jordan Young came through 90 minutes after his injury against ‘Ricay and should be fine for the game against Dorking. Will Richards featured on the bench for Chippenham against the Stones and could well make his return to the starting line up with Spencer Hamilton withdrawn on Saturday following a recurrence of a back injury sustained in Essex a fortnight ago.

In what promises to be a fantastic first installment of Chippenham’s bank holiday weekend, Dorking should provide a huge test for the lads as they look to bounce back from a difficult defeat last weekend and the loss of the manager straight after.

Gary and the boys will be so appreciative of your support and I am sure it will come in its numbers for a lovely little away day in Surrey.

So get on down and cheer the boys on, 6 cup finals remain!

Matchday info can be found here

Please note that any supporters travelling to Dorking Wanderers tomorrow should note that Dorking operate a segregation policy. Any away fans found in the home end will be removed from the ground without a refund.