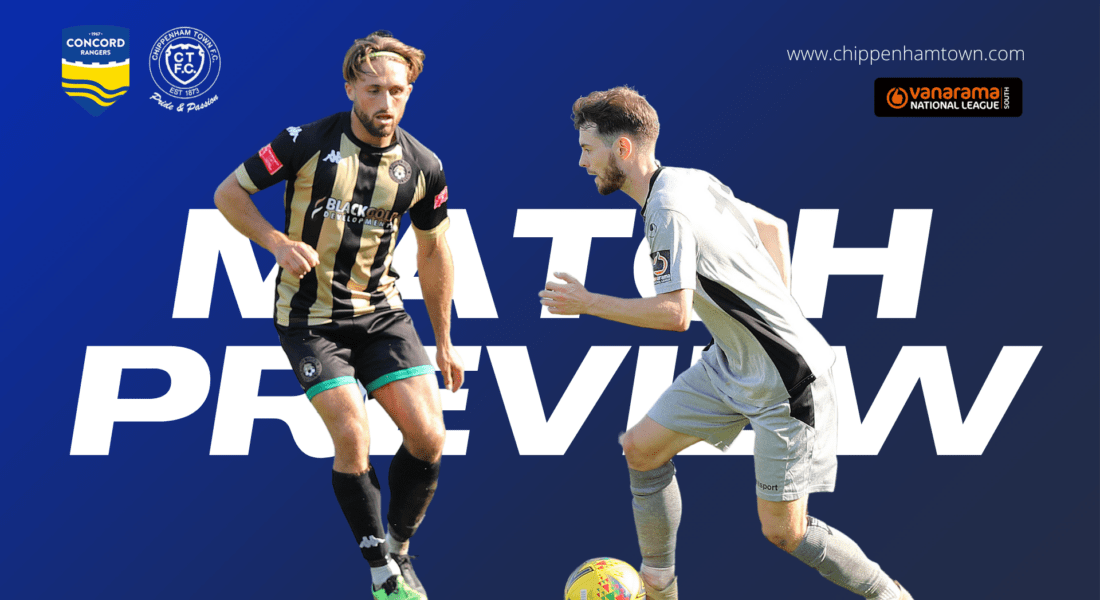 Check out our Match Preview, ahead of the National League South encounter between Chippenham Town and Concord Rangers.

After the FA Cup, attention switches back to the National League South this weekend for the Bluebirds as we face the trip to the Beachboys, Concord Rangers FC. Both sides come into this fixture after almost identical fates in the FA Cup. Chippenham requiring a replay to prevail against Poole Town however. despite their draw against St Albans, Concord were unable to get the job done in the replay and fell 2-0 to the Saints and exit the competition at the first hurdle after last seasons exploits took them to the 1st Round against Stevenage where they agonisingly exited on penalties after a strong performance over 120 minutes. Ironically, Concord were there at the expense of Chippenham after a 97th minute winner at the Aspect Arena saw the Blue Army return to Wiltshire with empty pockets.

In the League, both sides are in a position that nobody would have foreseen coming into the new season with visiting side Chippenham suffering only one defeat in 5 games and sitting 9th in the league with a game in hand on the teams above. And Concord themselves sitting 3rd after again only being defeated once in 6 games to Welling after a late winner. Both sides will have been surprised by their start to the season and this game will prove a chance for both Chippenham and Concord to put 3 valuable points on the board, even at this early stage of the season.

Chippenham come into the game with a few bumps and bruises from the two games over the weekend with Adam Mann still unavailable through injury and will unlikely feature in the game this weekend, targeting the Hastings FA Cup game for a return date assuming all is well. Will Richards was withdrawn Tuesday on a precautionary substitution as he recovers from a knee problem which we are hoping is not too serious. Spencer Hamilton will be hoping to shake off an injury as well to return to the side.
Concord come into the game full of confidence due to their start this season and we will particularly need to be wary of Lamar Reynolds on the wing, big striker Temi Babalola and midfield star Danny Green, Green chipping in with 2 goals this season and looking very much like Concord’s “One to Watch” this season.

Both teams are not setting the league alight in front of goal this season with defences really winning the day for both the Bluebirds and the Beachboys this term. And given previous results between the two sides and how close the games have been over the last few seasons, all signs point to a very even affair with chances few and far between and we will need to be clinical as and when the chances arrive. Both sides have come up against strong opposition in their start to the season so far and will both fancy their chances of getting something out of the game. If you are a betting person, the bookies have Concord as the slight favourites for this game at 1/1, whilst you can pick up a Chippenham victory at 2/1 and if you are particularly brave a 13/5 for the draw.

For those braving the long trip to Essex, The Aspect Arena is situated By Road from the West: Exit the M25 at junction 30 and merge on to the A13 travelling east towards Tilbury and Basildon. Remain on the A13 until you reach Sadlers Farm roundabout (after approx. 13 miles). At the roundabout take the exit signposted to Canvey Island (Canvey Way, A130). At the end of the road, take the third exit at the roundabout on to Canvey Road, and at the next roundabout take the first exit and remain on Canvey Road. Continue forward as the road becomes Long Road, then turn right on to Thorney Bay Road, then right again on to Thames Road. The Aspect Arena is towards the end of the road on your left hand side.

Price of admission is a very good £12 for adults with Children over 11 going for £3 and no charge for Under 11’s. There is no travel available for this game from Chippenham however, should you wish to contact the club, there may be limited space on the coach, subject to availability of course, you would have to adhere to the timetable of the travelling matchday squad so prepare for a long day should you wish.

Another tough fixture but one I am sure the lads are relishing after a little break from the League and a chance to get back to winning ways and add some much needed points to our fantastic early tally! Safe trip to all travelling supporters, as always, your support is valued and appreciated by all connected with the club #BlueArmy