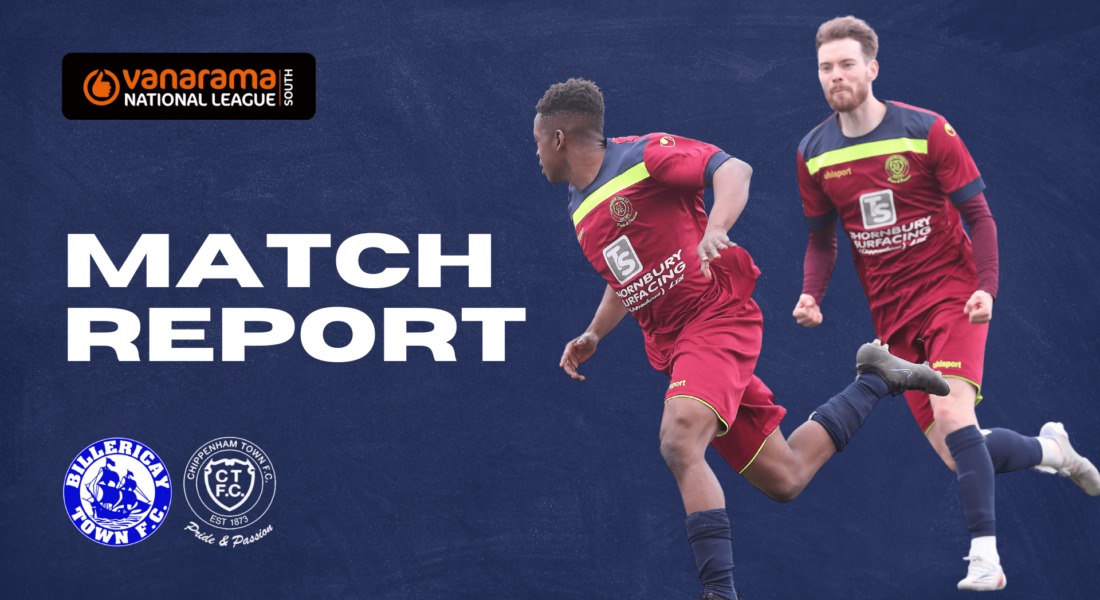 Chippenham recorded a league double over the Essex side, their only such achievement against sides in the bottom five.

Chippenham recorded a league double over the Essex side, their only such achievement against sides in the bottom five.

The game was settled with a goal forty five seconds into the second half by Mo Dabre, his first in a Chippenham shirt, the on-loan Swindon Town youngster having come on after an injury to Jordan Young.

The final moments of the game also proved nail biting as keeper Will Henry picked up a booking for time wasting and after the referee also awarded an indirect free kick in the box for that offence Henry threw the ball down and was given a second yellow and hence a red card and youngster Bailey Leach came off the bench to make an important save.

The Bluebirds dominated possession in the opening half but the home side fashioned more chances.

Billericay relied on long throws from Greg Halford and from one such throw Femi Akinwande’s shot was saved by Henry.

Young saw an effort go high before Kres Krasniqi found Akinwande whose low shot was turned behind by Henry.

The best chance of the half however fell to the Bluebirds as Danny Greenslade’s throw to Alfie Santos saw the ball played through to Luke Russe who beat two defenders before curling a shot just wide of a post.

A further Halford throw ended with Henry Ochieng shooting over.

Before the break a cross from Alex Bray saw Young unable to take advantage of the chance.

Young was injured shortly before the break and was replaced by Dabre.

The decisive goal came right at the start of the second half after good work from Bray saw Russe and Joe Hanks involved and as the home defence dithered over a clearance the ball fell to Dabre who took two touches before firing past Zaki Oualah.

At the other end Chippenham could have made the game safe as Hanks cut the ball back to Russe whose first time low shot was saved at the expense of a corner.

Bagasan Graham’s cross again saw Henry save from a Wright header before the late drama of Henry’s dismissal.

The resulting indirect free kick was touched by Akinwande to Halford whose shot went through the wall but was saved by Leach and after a further minute the final whistle went much to the annoyance of the home crowd and the delight of the Bluebird faithful.