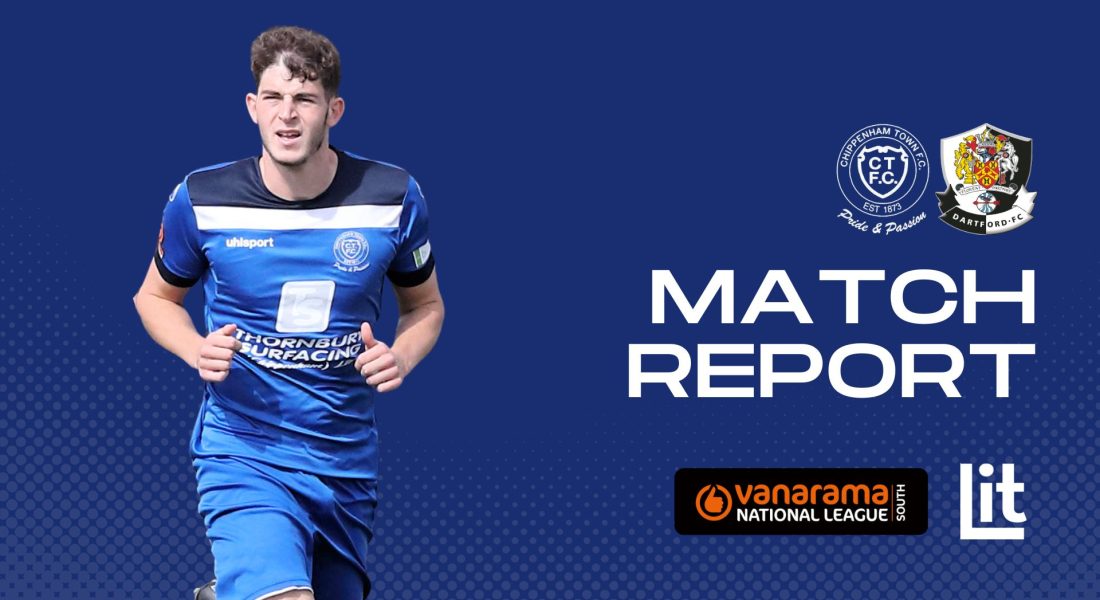 Chippenham denied Dartford the chance of a swift revenge for their play-off eliminator defeat in May as they came from behind to snatch the three points with a stoppage time goal.

Chippenham were the first to show after eight minutes when Noah Coppin’s effort was blocked.

Two minutes later the Darts went close when a defensive mix-up allowed Dan Roberts a free run but as he rounded Will Henry the keeper touched the ball wide.

Roberts retrieved the ball but with an open goal gaping he could only shoot against the bar.

The Bluebirds responded with on-loan Southampton debutant Will Tizzard having a shot blocked and Caine Bradbury superbly spun round Tom Bonner but dragged his effort wide.

On the half hour Kristian Campbell’s low cross reached Luke Allen but his touch was too slight to trouble Henry.

A minute later the roles were reversed as Allen supplied Campbell who volleyed over from twelve yards out.

Campbell then had two successive efforts blocked by Tizzard, the second led to a corner which although cleared was returned by Connor Essam and nodded back for Max Statham to head home on thirty nine minutes.

In the final minute of the half Alefe D’Abadia was needlessly pushed in the back by Jordan Wynter and he took the resultant penalty himself which saw Joe Young get to the ball but it squirmed under him  and just crossed the line.

Two minutes after the break Darts keeper Young hit his clearance into Coppin but the young striker was unable to benefit from the mistake.

Chippenham’s Young then saw a free kick go just wide whilst Allen looked to be on for a goal before he was closed out by two defenders.

Just before the hour mark another Young free kick was blocked whilst Luke Coulson failed to beat Henry as did fellow substitute Charlie Sheringham, Campbell then wasted a free kick from a promising position.

Three minutes from time Santos made room for himself but skewed his shot wide.

The first minute of stoppage time saw Young fouled in the ‘d’.

After a lengthy delay whilst referee Ross Martin battled to get the Darts defence to retreat Young hit a trade mark free kick into the top corner giving namesake Young no chance.

With four players bearing the name Will in the side it perhaps underlined the old saying ‘where there’s a will there’s a way!