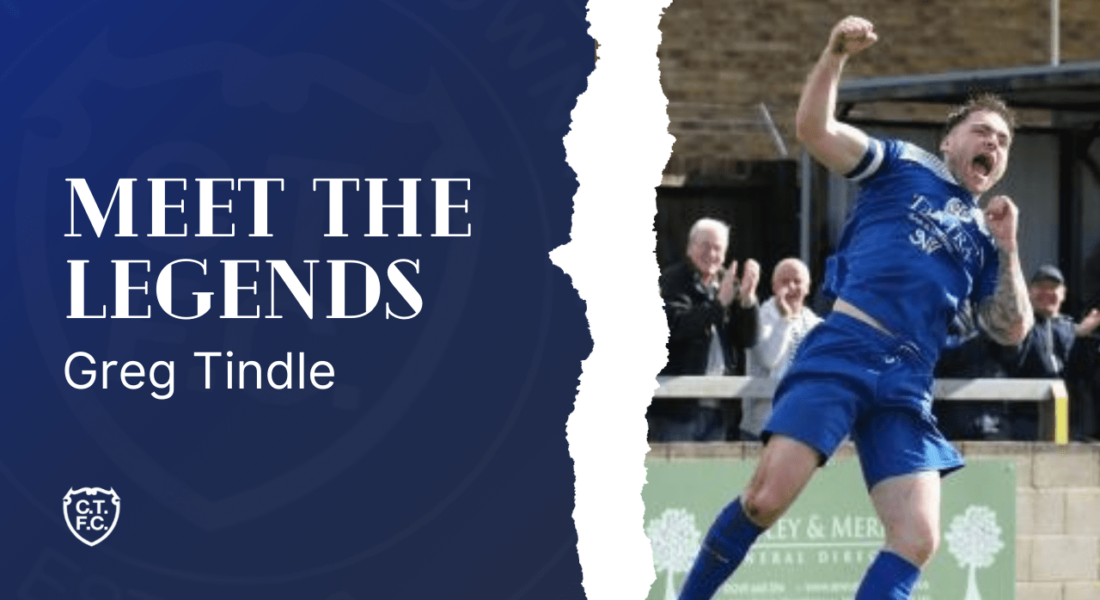 Continuing our “Meet the Legends” section as we head down to the big kick off against Manchester United on the 27th, we have Greg Tindle.

Tinds will need no introduction to the modern day supporter. An inspiration leader, a captain and a real warrior on the football pitch. A proper Chippenham lad, educated at Sheldon, played for FC Chippenham, as a boy he was taken in by the Oxford United development squad and was given a professional contract by the U’s upon graduation from the academy.

Sadly for Greg, injuries curtailed his playing time and he was released after only a year with the Oxfordshire club. A short stint with Kelvin Highmore at Melksham Town was ended when Chippenham Town manager Adie Mings brought Greg to the club in 2009. Greg became an instant hit amongst the Bluebirds and their supporters becoming a solid presence in the back line.

In his debut season Greg and his teammates gave Chippenham supporters much to cheer about as the Blue Army took the league by storm and gave a really strong account of themselves finishing 3rd in the Southern Premier League and coming through a tough Hednesford Town side in the playoff semi final to set up a clash with Nuneaton Borough. After a grueling game in tough, physical conditions, Chippenham eventually succumbed to defeat against their Warwickshire opponents and went down 2-1 after extra time to leave the Bluebirds devastated at coming so close to the Conference South.

Little did he know it at the time, but Greg would go on to have one of the most iconic careers in modern memory with the club. He was a mainstay in the Chippenham backline and played a pivotal role under Adie Mings, Nathan Rudge, Steve Winter and eventually Mark Collier, where Greg was handed the responsibility of club captain.

In 2016, Greg re-signed for Chippenham following a rather disappointing end to the previous season where the Bluebirds fought off a relegation battle for most of the season and entering the pre-season camp, not even Greg could have predicted what was about to unfold.

It was a season like many before, nothing particularly mind blowing about the way it started with the possible exception of a big turnover in players joining Greg in the Blue and White of Chippenham.

The Blues started with a bang. Draws against Kings Langley and St Neots coupled with wins against Weymouth, Cambridge, Leamington, Cirencester and Cinderford saw the Bluebirds sitting pretty at the top of the Southern Premier League after a hectic start in August, this would be a position Greg and his teammates would soon come to know as “theirs” throughout a magical season for Chippenham.

September kicked off with Greg playing his part in Chippenham’s highest ever margin of victory, a 9-0 win against Hampshire side Moneyfields in the FA Cup was followed up with another FA Cup victory against Poole Town of the Conference South. It was at this moment, Chippenham knew they had a side capable of playing at that level as they didn’t just beat Poole, they blew them away. 4-1 the scoreline and Chippenham were in the hat for the 3rd qualifying round.

In the league, Chippenham had started to show signs that they were human after all. Defeats against Kings Lynn and Banbury only briefly stalled Chippenham’s league form as where the Southern League was concerned, the best was yet to come. October started on a disappointing note. A long trip to Essex saw Greg lead his side out against talk of the non-League scene, Billericay Town. Chippenham’s FA Cup dream was over for one more year after being eliminated at the 3rd QR stage but in the league, 4 wins from 5 saw Chippenham firmly in the hunt for the top spots. And then what followed was the stuff of legend. Greg with the armband strapped tightly around his arm, led his Chippenham side to an unparalleled run of form from the 18th of October 2016 until the 15th of April 2017. Chippenham only suffered defeat once, drew eight times and won a massive twenty games.

This was a run of form that would see Chippenham for the first time in their illustrious history, win the Southern Premier League with several games to spare and each one was like a party for all supporters, directors and of course the players themselves that will always be heroes to those who don the terraces for giving Chippenham the Southern League Championship but most importantly National League South football for the first time in their history.

Greg lifted the giant shield in front of some 1300 supporters at Hardenhuish Park and captained the side that broke the record for points accumulated in a league season with 103.

Injuries plagued the end of Greg’s time at Chippenham with a rather aggravating hip injury forcing Tinds to sit out for 6 months, a time that Greg to his credit, rehabilitated well and made his way back to Chippenham and was welcomed as the heroic captain that he was.

In 2019, Greg, to the shock of many, left the club and headed for Southern Premier League new boys Weston-super-Mare AFC. His signing was seen by all as a real statement of intent for Weston to bounce back to the National League South at the very first attempt and Greg was made captain until his departure from Weston in 2021 with his non-League career going full circle and signing for former CTFC management duo Richard Fey and Nathan Rudge at Melksham Town.

Greg’s fantastic career will not only be defined by the big old shield he hoisted in 2016/17 but by the countless displays of heroism on the pitch, leading his side often to believe in themselves when belief looked lost and being a constant influence to many a young Chippenham player in his long career with the club.

A modern legend, Greg’s retirement at the end of last season was greeted with sadness and also relief that Greg could now spend some time with his young family and enjoy a life with them outside of the game.

But not before one last hurrah with the Bluebirds! Welcome home Captain, Leader, Legend, Greg Tindle.

Before he returns to the Thornbury Surfacing Stadium, we caught up with Greg for a little chat ahead of the big game.

Simon – So Greg, I have had the pleasure of knowing you now since we were about 11. A Chippenham lad through and through signed for us in 2009. What was that like signing for your boyhood club?

Greg – It was an amazing feeling. After leaving Oxford and the ‘pro game’ you kind of lose your love a little for football but after signing with Melksham and then of course Adie coming in for me at Chippenham, it was a great feeling. Chippenham are obviously a big club and I remember watching them at Wembley with my dad and my brother so it was amazing to be pulling on the shirt of the team I sort of grew up watching.

Simon – It was an amazing time back then for us young lads watching but obviously you grew up within the game, you signed for Chippenham yourself and had many amazing moments in the Blue. Any one in particular that springs to mind as your greatest?

Greg – Yes, we were away at Hayes and Yeading in the 2016/17 season. We were obviously playing very well but on this day we were absolutely terrible and were 1-0 down and the game was getting away from us, we had about 5 or 6 minutes left on the clock and nothing was clicking. We scored two late goals, a Will Richards goal from a corner and an injury time winner from Pratty (Dave Pratt). It typified everything we were about that year. We were relentless, we ground teams down and even on our off days, we found a way to get it done. I remember walking off the pitch at the end of that game, caked in mud and sweat and saw the management team from Slough Town (John Underwood and Neil Baker) and they just knew that they weren’t catching us and you know what, we knew it too.No one could stop us from our ambition of winning the league. We were just too good and we had the swagger and belief to back it up.

Simon – It was an absolutely incredible season and that game in particular I remember standing behind the goal and getting covered in mud from a Will Richards hug on the goal. It really was a horrible day but you’re right, it typified all you were about that season. A season of course that resulted in what I am sure is your standout moment for the club?

Greg – Oh yes! I had some amazing times at Chippenham but there will never be a feeling quite like lifting that big old shield above my head in front of all of our supporters. It was my first league title as it was for many of the lads so it was special for us all. Champions is a title only very few are lucky to have and it was absolutely our standout moment to win the Southern Premier League and lift Chippenham into the National League South.

Simon – Amazing times. Now Greg you have played with so many players over your time at Chippenham. You have been here since 2009 and only left in 2019 so most of the lads in the squad for United Legends, you’ll have played with. Any teammates of yours down the years that really stood out for you?

Greg – You know what Simon, I am going to go for a strange one here as he might not be as well known as some of the others but when I first arrived, there was a young lad called James Martin. He looked like a private school boy but an absolute unsung hero, heart of a lion, loved a tackle, he was my sort of player.

Simon – Haha, that is a strange one, I thought I remembered most Chippenham players but I can’t remember James. Now Greg, it’s only as recent as last season that you hung up the boots so getting back out there isn’t going to be quite the ordeal it might be for some of your teammates on the day but what are you most looking forward to about coming back home Greg?

Greg – Catching up with some old friends, seeing some old faces on the terrace and of course stepping out onto that pitch again. It held so many great memories for me and it’ll be amazing to be out there again. As it often is with the life of a non-League footballer, I didn’t really get a proper chance to say goodbye to the club after such a long time being there, it’ll be nice to get out and see those supporters again, give them a wave and hopefully give them something to cheer about one more time.

Simon – Greg, honestly, from all of us here at Chippenham, we cannot wait to see you out there again and thank you mate for playing such a huge role in one of the best times in our lives as supporters of Chippenham Town. We will see you on the 27th and welcome home captain!

Come and see Greg in action as Chippenham Town Legends take on the Manchester United Legends XI at the Thornbury Surfacing Stadium on the 27th of March 2022. 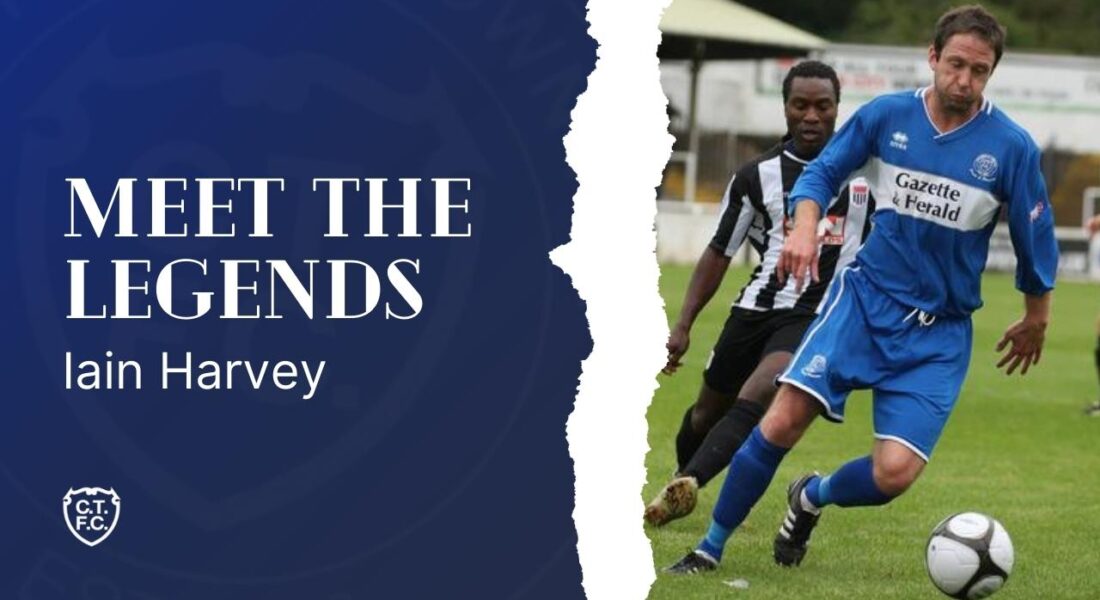 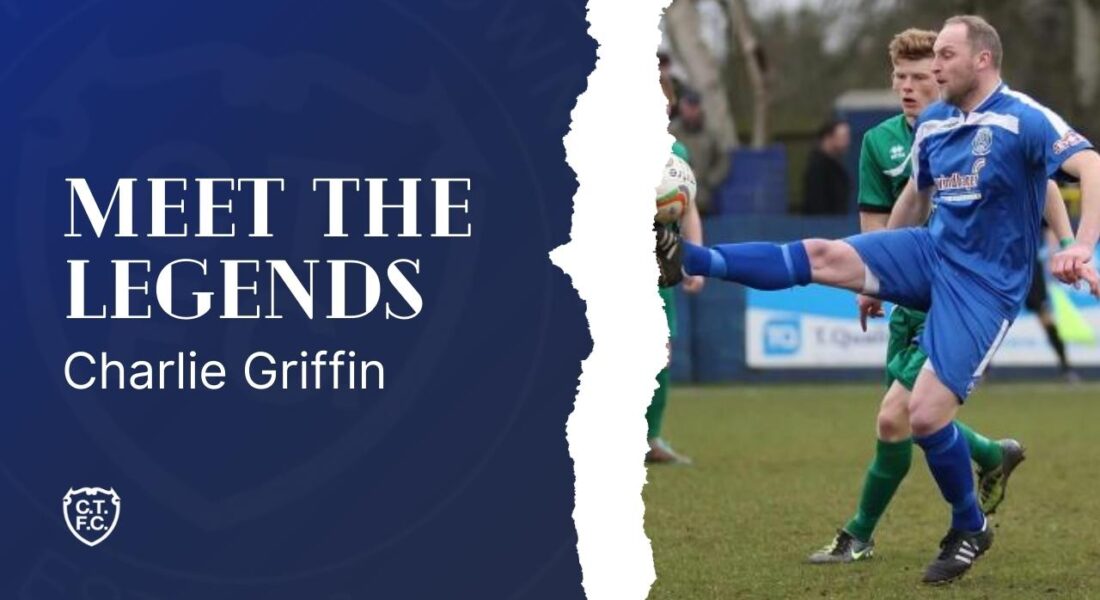 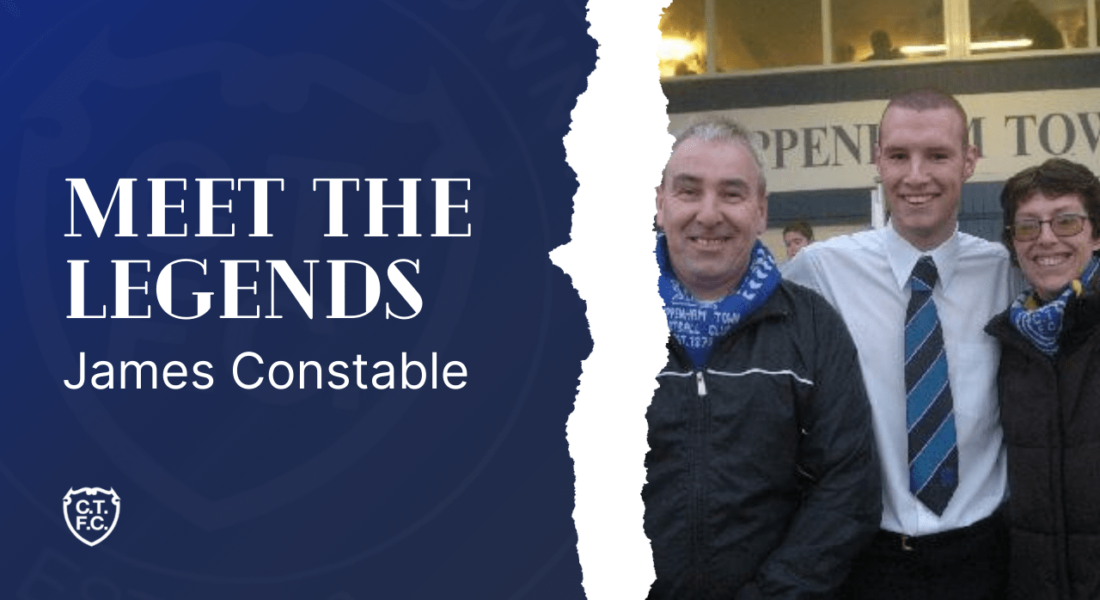 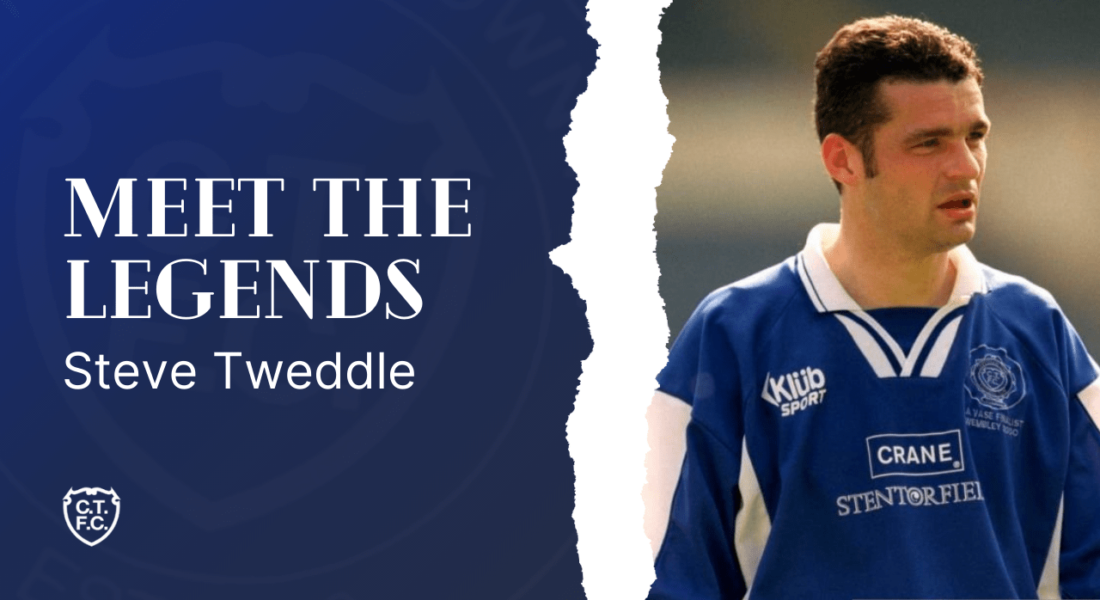