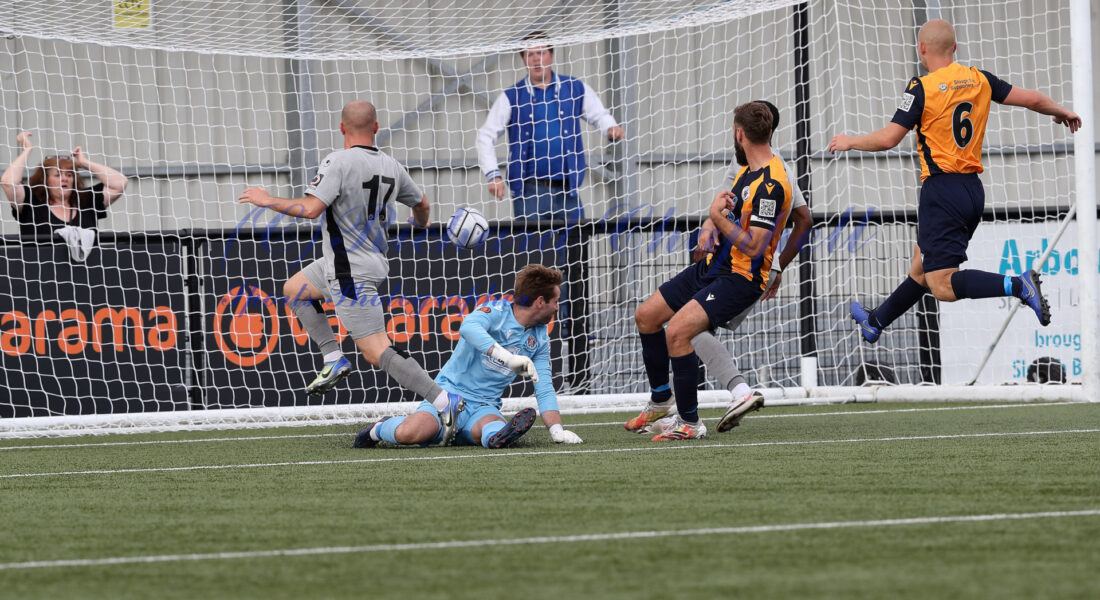 This game was the tale of two keepers as Chippenham’s Will Henry saved a penalty whilst a mistake by home keeper Jonathan North, who dropped Harvey Bunker’s free kick.

This game was the tale of two keepers as Chippenham’s Will Henry saved a penalty whilst a mistake by home keeper Jonathan North, who dropped Harvey Bunker’s free kick, allowed substitute Ross Stearn to grab a last minute winner for the Bluebirds.

The first chance fell to the Rebels on five minutes when Tom Derry headed back to Eitel Goueth who fired wide. Little then happened until the nineteenth minute when Henry saved Matt Lench’s deflected shot.

On twenty six minutes Derry found himself one on one with Henry but shot straight at the Bluebird keeper.

At the other end Alefe Santos’s shot was very wide. Ten minutes before the break Adam Mann’s fierce shot was pushed behind by North but Joe Hanks’s corner came to nothing.

Three minutes before the break Santos’s shot deflected for the Bluebirds’ second corner but Hanks’s flag-kick was held by North. Harry Warwick’s shot then lacked the power to beat North.

Five minutes after the break Marlon Jackson’s shot was saved at the expense of a corner but Adam Mann’s flag kick was held by North. At the other end Max Worsfold’s shot was held by Henry.

On sixty three minutes Stearn’s shot was off target. Four minutes later Stearn cut in but shot straight at North.

A quarter of an hour from time Slough won their first corner of the game but it came to nothing. Slough’s George Hunt then made a great saving tackle on Luke Russe. On eighty one minutes Slough sub Gabe George’s shot hit sub Harry Bunker on the arm and the resultant penalty was taken by Goueth but superbly saved by Henry.

On eighty seven minutes Slough sub Scott Davies shot over. In the first of four minutes of stoppage time Mann’s shot went wide, while Jackson’s cross went all the way across the face of goal. In the fourth minute of stoppage time Harry Bunker’s free kick was dropped by North and Stearn was on hand to convert to give Chippenham their first three points of the season.